The end of the year brings with it all sorts of compilations, lists and summaries of the good, the bad and the ugly of the year that’s coming to an end. And On Africa is no exception to this – see here the top-10 stories of 2009 (in English and in Spanish/español), and the ten photos that summarise 2010 (although without photos 😦 since the links broke when I transferred from Maneno to WordPress earlier this year and I have not fixed it yet…).

This year, I have compiled a list of the most viewed original posts written this year (according to WordPress). What this means is that the list excludes posts written in the past (the post most viewed this year is this one on Conguitos, a politically incorrect Spanish brand of sweets, written in march 2010). Also excluded are those posts that serve as self-promotion for pieces published for other media but to which I have made reference here.

So, whilst technically incorrect, the list makes this up in relevance, for these posts reflect better some of the most important news and stories in the African continent and beyond; with some exceptions – South Sudan independence, the war in Côte d’Ivoire (both these stories have op-ed pieces devoted to them and can be viewed on the «Other Work» section), as well as cultural notes. What is there includes: Zambia’s presidential election, Bin Laden’s death, Kenya’s invasion of Somalia and the «Arab spring» among others…

Enjoy these stories, leave below any comments you may have, and have a wonderful festive season and end of the year and beginning of 2012! END_OF_DOCUMENT_TOKEN_TO_BE_REPLACED

Sometime last week I came across the latest fancy online tool from Google Labs – the Google Books Ngram Viewer. At first I thought it was just an advanced pastime, perhaps with the potential for interesting uses, but did not think of how to put it use. Then, over the weekend I came across this zunguzung post, which uses Ngram to recreate the history of race in the 20th century (really worth having a look!). It was then that I thought of doing a similar thing – albeit in a much more simplified and less detailed version – with some «Africa» and «African studies» related topics.
Here are some examples:

First, and although not really unique to Africa, I though of comparing some of terms used in academia to speak of different societies. This is the result:

“Primitive peoples” was (luckily) never extremely popular and declined from the early 1920s-1930s; as for “ethnic groups”, its popularity “boom” took place in the 1960s. The now derided word “tribe” however remains the most popular one, although it has experienced a clear decline (perhaps its popularity is due to its uses in other contexts – such as “urban tribes” or Roman history.

Then I tried a much more specific comparison using the two ideologies I analysed and compared on my Masters thesis: “African Socialism” and “ubuntu”

The result is largely what I expected – although the “African Socialism” boom is greater than I thought, and its “spiky” decline is interesting. A bigger surprise was the small “boom” of “ubuntu” at the turn of the 20th century – much earlier than the uses I have come across – which relate to the post-apartheid context (where “ubuntu” popularity markedly increases). Can someone enlighten me on this early appearance?

In which South Africa clearly leads the pack, with Nigeria and Kenya going neck-and-neck during the early part of the century, after which Nigeria took off.

And one for political leaders:

Here again, the results were largely what I expected. Nkrumah was the unchallenged “most popular” political leader during the 1960s, 1970s and first half of the 1980s; after which Mandela’s rise eclipses all other figures.

Ngram then, provides a curious – although not scientific – way of exploring how words, people, places and concepts became more or less popular across decades.
So, have you come up with more exciting comparisons? If so, please post the link to it on the comment section. And if not, have a go at it, it is entertaining and may throw some surprises…

«gives a year-by-year presentation of selected themes in the history of Africa between 1879 and 2002…is designed to be an instructional tool at the secondary and college levels as well as for the general learner. It is subject to revisions based on new research and user feedback.»
«You can advance or reverse the chronology and change the speed with «play,» «fast forward,» and «rewind» buttons.»

It has been developed by Brown students, under the guidance of Professor Nancy Jacobs and Rolando Peñate.
Below are some still images from 1895, 1960, and 2002.
To explore the map, click here
1895 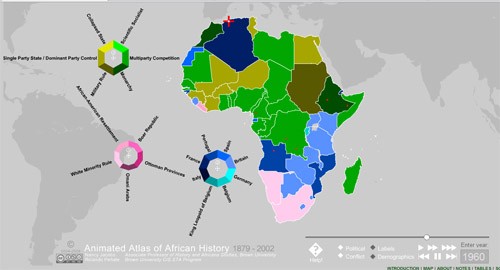 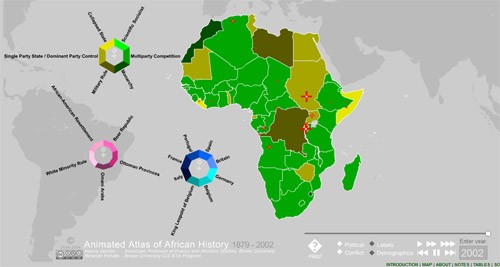