Only seven days to the start of the World Cup (five since this has been translated to English…), which means more news and stories about the tournament, the teams, etc. In order to keep up with all the latest news, on this fourth World Cup countdown entry I will try to point to some pages which can help us follow what is going on. For this reason also, numerous media and platform have set up specific pages with World Cup related info. This is the case with Global voices, which has launched a page with all the stories and blogs related to the World Cup and written by people from differen countries, as well as a live-chat that will work during the games. Linked to this, there are also two Twitter accounts – one in English (@2010) and one in Spanish (@2010es).
Another platform that has a special section is Maneno – which has created a World Cup Focus Page where we can find not only entries published on Maneno, but also links to other webs submitted by readers.
Also a few weeks ago, Olunyi D. Ajao recommended three African webs to follow the World Cup. These are the MTN page, the main telephone company on the continent and tournament sponsor; KickOff.com, Africa’s most important football site; and SuperSports.com belonging to South Africa’s leading sport broadcast. Through all these sites, as well as that of other European and African media like El País), BBC and Mail & Guardian we can follow all the information and news – like Mandela’s appearance at the opening ceremony – for the few days before the start of the tournament and during the whole it will last. 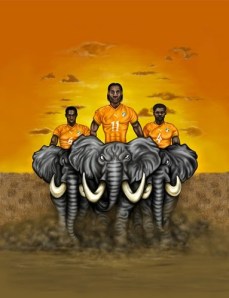 some of the 32 murals designed by South African designers «Am I Collective» for ESPN (h/t A bombastic Element & MacJordan)
To all these media, we can also also add all the different blogs that are either dedicated to football and the World Cup, or will simply write the odd entry about it (like this blog).
So what are some of the talking points of African footbal fans? A main topic is discussing the list of players each team will take to South Africa: on the host’s team for example, the news is that Benni McCarthy is out of the team; in Ghana it was MacJordan who gave his opinion about the team’s chance of success, which for Ato Dadzie are slim after the country’s 4-1 defeat to Holland; Gef’s Football Club – blog about Cameroon’s football team – also writes of the latest news, specially Roger Milla’s war of words with Eto’o – and the latter’s threat to walk out of the team…
It is however, not only on those countries whose teams are taking part that people talk about football. In fact one of the most heated debates has taken place in Tanzania. The discussion revolved around the friendly match that has just seen the «Taifa Stars» take on Brazil – and especiall the fee Tanzania has had to pay for this game to take place (rumored to be $2.5 million. (by the way the game just finished and Brazil beat Tanzania 1-5). Some people argue this money would be better spent eslewhere – even within the world of football, on better facilities – while others (including the sports minister) think this will give Tanzania lots of publicity. Another element of the debate is the price of tickets – with the cheapest being $21 and the most expensive $140 – clearly outside what most of the population can afford. Both Faustine Baraza, and Global Voices (more extense) have summaries of the discussion.
Footbal fever is thus taking over the world – and especially the African continent – for this, in some way, could be said to be their tournament. And there are many ways of following it, some of which we have just mentioned – and if you know about more webs and blogs centred on African teams and football, feel free to post a link as a comment. Nevertheless, there are many people – especially on the rural areas – with no access to television or internet and therefore unable to watch the tournament. Because of this, we should welcome initiatives like «Kenya Field of Dreams», which seeks to take to these places the magic of football. A beautiful project, whole «pilot» took place in Rwanda last February – the story and photographs of the event can be found on this Kigali Wire article.

Una respuesta a “World Cup countdown (1 week!): what are African fans talking about, and where can you find about it”